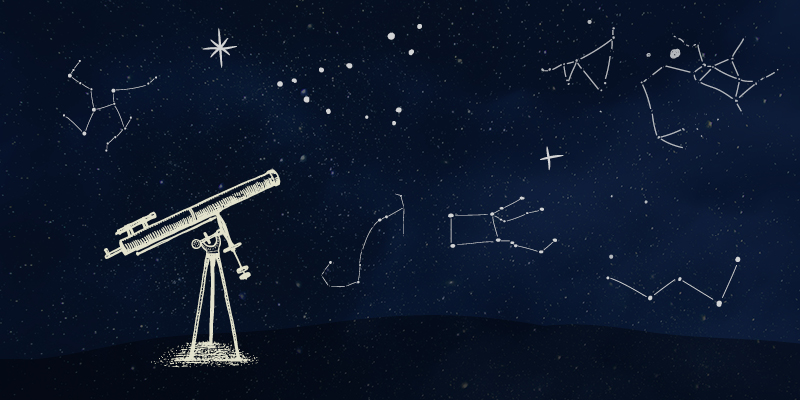 Have you ever gazed up at the night sky and marveled at the mysterious beauty of the universe? If looking at the heavens leaves you feeling star-struck, you're not alone. For as long as humans have been around, we've been studying, staring into, and storytelling about space.

Maybe it's because stargazing is infinitely entertaining—from Super Flower Blood Moons to solar eclipses and meteor showers, there's always a show in the sky. However, it’s even more interesting when you know what you're looking at!

With 88 total constellations, searching for and identifying specific patterns can prove to be a little challenging at first. You’re sure to have beginner’s luck with these five constellations that are easy to spot.

Look to the northern sky in the summer to see Ursa Major's distinctive “cup” (bear's chest) and “handle” (bear's neck and head). Two exceptionally bright stars, Dubhe and Merak, make this constellation even easier to find.

Move northward from Ursa Major to see another, smaller “cup and handle.” That’s Ursa Minor, a.k.a. Little Dipper or Little Bear. The brightest star at the end of the “handle” is Polaris (the North Star), long a key navigation point.

Orion may be best known for its “belt” of three bright stars in a row, but the rest of this constellation—which looks like a hunter drawing a bow—also contains the bright stars Rigel (the hunter's left foot) and Betelgeuse (the hunter's right shoulder). Look for Orion from November through February.

Every hunter needs a dog; find Orion's by passing a straight line along The Hunter's belt and following it southward until you see Sirius, a bright star that shapes the dog's nose. Further down and to the left, you'll notice a triangle of stars that resemble a dog's hindquarters.