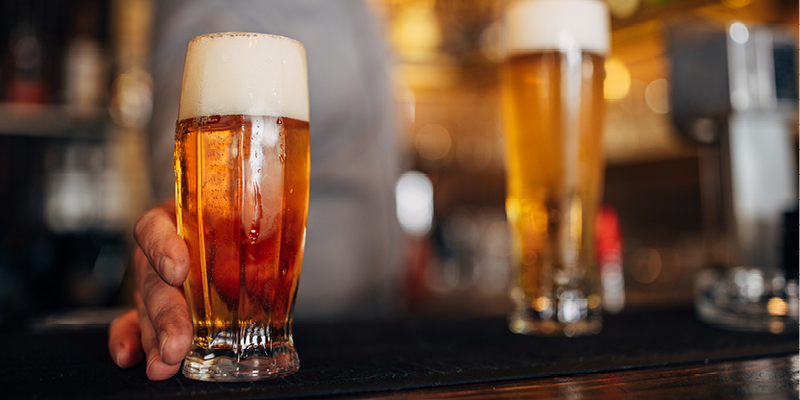 For many, fall is beer-drinking season. With Oktoberfest, football, and holiday celebrations crowding our schedules, you might find yourself rubbing elbows with more beer drinkers now than any other time of the year. To keep pace with your beer-drinking counterparts and hold your own in the wide world of beer, we’re breaking down some basic facts and decoding the most popular types of beer on the market today. Follow along to expand your brew knowledge.

Beer is Made with Four Basic Ingredients

All beers are made with four basic ingredients: malts, yeast, water, and hops. While they sound simple, they all play a pivotal part in how your beer tastes, looks, and feels. Malts are malted grains, like barley, wheat, and rye, and they’re the basis for beer. Water dilutes the beer and makes it drinkable, and hops counterbalance the sweet maltiness with bitterness. Yeast transforms the ingredients into beer, eating away at the sugars and releasing carbon dioxide and alcohol as it does its job. All these components work together—in various quantities and in specialized methods—to create the drinkable substance known as beer.

All beers can be put into two categories: lagers or ales. The difference between the lager and ale is all in the fermentation process. While ales ferment at a higher temperature and take less time to mature, lagers ferment at lower temperatures and take longer to complete. Ales are created through top fermentation while the yeast used to create lagers tends to settle at the bottom of the beer. From this initial categorization, beers evolve into different styles and flavors and are grouped into sub-categories, or types of beer. Here are the eight most common types of beer, their flavor profile, and examples.

Hoppy and strong in flavor, you might notice bitterness in this medium-bodied beer. Pale ales can feature notes of citrus, floral, pine, and sulfur. There are several types of pale ale, such as a blonde ale, an American pale ale, and an English pale ale. Some pale ales you might find at a bar include Sierra Nevada Company’s Pale Ale and the Great Divide Fresh Hop Pale Ale.

From the lager family, pilsner could arguably be the most popular beer in the U.S. However, it originated in the Czech Republic. Characteristics include a dry, slightly bitter flavor with a crisp, clean finish. Light and simple, pilsners you might recognize include Budweiser and Coors Light.

Easy to drink and light on the palate, wheat beers are generally fruit-forward and contain a medium to low alcohol by volume (ABV) level. They aren’t very hoppy or bitter. Often served unfiltered, you may notice they appear cloudy and are garnished with a slice of lemon or orange to bring out their citrusy, fruity notes. The top two best-rated wheat beers by Beer Advocate are Civil Society Brewing’s Pulp at number one and Trillium Brewing Company’s Pier American Wheat Ale at number two.

A dark-colored beer that’s medium- to light-bodied, brown ale is more malty than hoppy and can come in a range of flavors. Brown ale drinkers savor flavors like chocolate, caramel, or toffee. Some brown ale beers you might consider trying are the New Planet Beer Company Brown Ale and the Tommyknocker Brewery Small Patch Pumpkin Harvest Ale.

Indian pale ales have risen in popularity in recent years and now have a variety of classifications. You can find British IPAs, New England IPAs, or Hazy, Imperial, or Double IPAs. One of the characteristics that’s consistent among all IPAs is their high hops capacity. IPAs can be bitter and bold, while others are light and fruity. There are several IPAs on the market—all with varying flavors—but some notable ones to try include Harpoon Brewery’s Harpoon IPA and the Happy Hops IPA by Russian River Brewing Company.

Malty with notes of chocolate and caramel, some stouts can also be bitter thanks to their high hops content. Full-bodied beers, stouts are usually dark in color and feature a thick, creamy head. You might find cream stouts, oatmeal stouts, or dry stouts. The most recognized stout in the world is Ireland’s Guinness.

As the name implies, sour beers are acidic and tart. Crafted from wild yeasts, sour beers have a bacterial component to their fermentation—similar to how sourdough bread is produced. Some types of sour beers include goses, lambics, and Flanders. Here are sour beers you may find at your local beer store: Almanac Beer Co.’s Sournova and Brooklyn Brewery’s Bel Air Sour.

Expanding your palate is more fun when you can explore new beers with complementary foods. Check out our article, “Delicious Dips for Your Next Cookout,” and pair the chocolate in the Easy Smores Dip with a stout and a pale ale with the Pizza Dip. Enjoy!