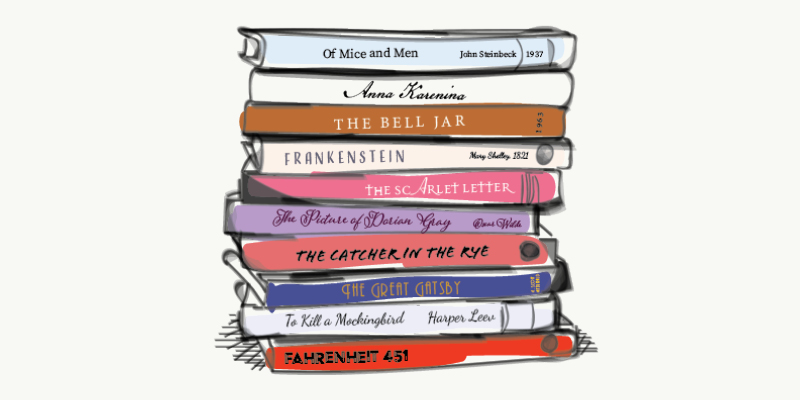 Certain books are classics for a reason—they were good reads then and continue to touch hearts at this very moment. Even though times have changed and technology has advanced, themes of love and loss, commitment and duty, and equality and justice still resonate today. We’ve rounded up the ten best classics you must read, or reread, right now.

Set in a dystopian future, lead character Guy Montag is a firefighter whose job is to start—not stop—fires. As a firefighter, Guy must burn all books, the information they contain, and even the houses that hide them. A future where information and learning are suppressed by the burning of publications meant to educate and entertain, this book might be more topical today than ever before.

To Kill a Mockingbird by Harper Lee, 1960

This story is told by Jean Louise Finch (nicknamed Scout), the young daughter of Atticus Finch, who is a lawyer representing Tom Robinson, a Black man accused of rape. It tackles the heavy themes of racial injustice and the loss of innocence but is a thought-provoking and engaging read when recognizing the fact that it’s told through the eyes of a six-year-old.

Inspired by the author’s own experiences, this book takes you back to all the pomp and circumstances of the Jazz Age. Set in the roaring 20s, it follows multi-millionaire Jay Gatsby, his love interest Daisy Buchanan, and other characters entangled in a world of opulent wealth, lavish parties, and jealous deceit. It’s entertaining, yet dark and twisted, too.

Continuing to capture the minds and hearts of people worldwide, protagonist Holden Caulfield, at 16 years old, leaves his prep school in Pennsylvania to take a few days for himself in New York City. Identifying all the “phonies” he encounters along the way, this book is as much a tale of teenage angst as it is a commentary on the superficiality in society.

The Picture of Dorian Gray by Oscar Wilde, 1891

Touted as a philosophical novel, this book is the story of Dorian Gray, a young, handsome, and narcissistic man who indulges in all pleasures and sins, testing a hedonistic lifestyle. It’s this way of life that he wishes to live while his portrait, painted by Basil Hallward, endures the pain, age, and sacrifice caused by his own bad choices. Taking the adage, “art imitates life,” it’s a fascinating tale of selfishness, morality, beauty, and self-worth.

The Scarlet Letter by Nathaniel Hawthorne, 1850

Set in Puritan Massachusetts Bay Colony in the mid-1600s, Hester Prynne has not only had an affair, but has also given birth to a daughter as a result of it. She’s publicly humiliated and punished by being forced to wear the scarlet “A” for the rest of her life. This is a story of honor, marriage, and the feelings of guilt and shame for loving someone else.

Part horror story, part science fiction, part gothic novel, this book is about an eccentric scientist named Victor Frankenstein who conducts an unorthodox scientific experiment and creates a monster-like creature. Contrary to popular belief, Frankenstein is the name of the scientist himself, not of the giant monster that he created. You’ll be enthralled by the inventiveness of Victor Frankenstein while also feeling compassion for the endearing creature that horrified him.

Described as a modern classic, this book chronicles the life of fictional character Esther Greenwood, a young writer who finds herself in the middle of New York City, interning at a prominent magazine and front-and-center of a glitzy and glamourous lifestyle that she has no interest in. A semi-autobiographical story, this book is a close examination of a seemingly ordinary life derailed by mental illness.

This lengthy classic centers on the heroine Anna and her extramarital love affair with Count Alexei Kirillovich Vronsky. Set in Saint Petersburg, Russia, their scandalous affair is creating whispers among their social circles, forcing them to find happiness elsewhere. A book that focuses on betrayal, Imperial Russian society, desire, family, and marriage, it’s everything you’d want in a love story and so much more.

This story narrates the experiences of two displaced migrant ranch workers who travel across California, looking for work. George Milton and Lennie Small may be an odd pair, but their bond has made them brothers, battling a world of uncertainty, loneliness, and poverty. A captivating read, it’s their big dreams that keep you engaged until the very end.