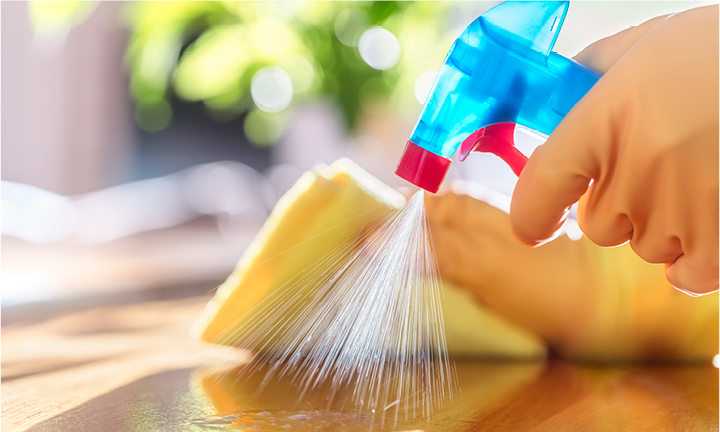 So you want to know what the germiest place in your home is? (We’re assuming this since you were kind enough to click on our blog post). Well, the answer might surprise you. Most people associate germs with things they find disgusting, and as a result, would guess something like the toilet is the nastiest place in your home. It’s not, though. In fact, it’s not even close. Let’s get started with number one.

Sponges suck up water and stay moist because, well, they’re sponges, and they hold plenty of food from scrubbing dishes for bacteria to eat. 86% of sponges within the sample tested by the NSF were identified as having mold or yeast, while 77% had coliform bacteria, which includes the dreaded E. coli.According to a 2011 study conducted by the National Sanitation Foundation, dish sponges are the single germiest place in your entire home. It makes sense, too, if you think about it. Sponges are the perfect place for bacteria to live, breed, and party it up.

To clean dish sponges, you can soak them in water and microwave them, which is a prevalent cleaning method that will kill bacteria. You can also run them through the dishwasher on heated dry. You should clean your sponges after each use, as they soak up nasty bacteria like a, well, sponge. You should also go ahead and replace your sponges every two to four weeks to keep your kitchen sink area free and clear of nasty bacteria.

According to the same study by the NSF, sinks were again frequently full of coliform bacteria and mold. 45% of sinks tested were positive for coliform, and 27% were positive for mold, which is a significant step down from the dish sponge, but still pretty gross.Many people would guess that the bathroom is the germiest room in your home, but the kitchen is certainly here to give it a run for its money. Kitchen sinks are harborers of food scraps, and you don’t typically dry them out after use, making them another appealing place for bacteria.

You don’t have to be too careful about how you clean a kitchen sink. You can scrub it down with some disinfecting spray and a towel or sponge, preferably an unused sponge. You can plug it and fill it with warm soapy water and bleach.

NSF noted it as the third germiest place in your home overall, but with notably larger amounts of mold and yeast than what is found in your kitchen sink. Regardless of the specifics, you should clean your toothbrush holder more regularly.This one is a little more surprising but starts to make sense as you think about it. Mouths are germy, and a toothbrush’s job is to remove food and stuff from your teeth. You then typically rinse your toothbrush but don’t actually clean it with anything other than hot water. So naturally, the place that holds these items is going to become a refuge for bacteria.

An easy solution to this is to buy a toothbrush holder that is dishwasher safe and run it through the sanitize cycle that many modern dishwashers come with. If that isn’t an option, you can always wash it out with soap and hot water and then wipe it down with a disinfecting wipe. That should do the trick.

Of these three things, the faucet handle tested positively most consistently for coliform and mold growth. This, in addition to the faucet spout itself, should be cleaned often. You may not have time to do so daily, but you cannot clean these too often. A simple wipe down with a disinfecting wipe or spray should send those bacteria packing pretty quickly.This one should be obvious. The three things you touch between using the bathroom and washing your hands are the flush lever on the toilet, the faucet handle, and the soap pump. All of those things are, as a result, very germy.

While these certainly aren’t the gathering place for bacteria that some other kitchen items on this list are, it’s still a good call to disinfect your countertops. Know how to clean your specific type of countertop, though. Some don’t stand up well to hard chemicals such as bleach, and you’ll need to opt for a soap and water treatment.

Lots of things make their way onto your countertops. Food scraps, water spills, and bags that have been at the grocery store can all be germ couriers that deliver coliform bacteria to the tops of your beautiful marble countertops.

The NSF study noted that more than 50% of TV remotes and nearly 60% of video game controllers have measurable populations of yeast and/or mold. You know your kid is not cleaning his game controllers. Clean these things, people!Unlike the germiest places in your home, remotes don’t hold moisture or come in contact with food scraps, well, unless you are doing something very weird with it. They get touched by a lot of different hands, though, and they are very rarely ever cleaned. Hands are basically public transportation for germs, so anything that is frequently picked up is going to have some germiness.

A wipe down with a disinfecting wipe is just fine. Please do not put your TV remote in the dishwasher or the sanitize cycle on your washing machine. Take two seconds to wipe these handheld devices, and you’ll be glad you did.

The NSF study identifies keyboards as the single germiest “personal item” in your home. 68% of keyboards tested in the study had yeast and mold on them. That’s a higher percentage than your toilet seat, your kitchen sink, your bathroom doorknob, and almost every other thing tested. Your keyboard isn’t likely to carry other kinds of bacteria, which are generally considered more hazardous to your health than mold, but a good cleaning is still always recommended.This one may surprise you, but the keyboard on your desktop or laptop computer is one of the germiest places in your entire home. It’s worse than your toilet seat. Much like the TV remote, it’s touched a lot and virtually never cleaned, allowing it to become very nasty gradually.

Keyboards are very hard to clean. A can of compressed air will help blow out debris and other grossness that gets caught within the keys. You can disinfect with a standard disinfecting wipe. Just be careful not to allow any moisture to seep under the keys, especially if you are using a laptop.

You should clean your dog’s bowl regularly. Scrubbing with soapy water is really all that is necessary. Not all dogs love toys, but if your dog is a toy dog, clean hard toys, such as rubber chewables and stuff like that, with soap and water weekly. Soft toys can be run through your washing machine’s sanitize cycle.

This article originally appeared on secondnature.com and was republished with permission.