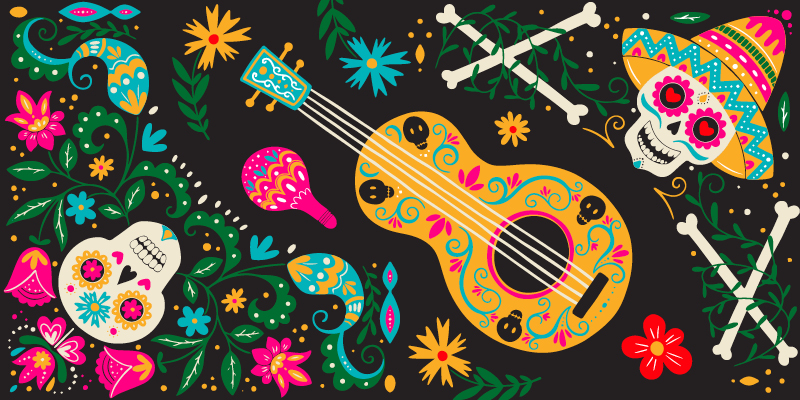 Spooky season is upon us, and while Halloween is top of mind for most, there’s another celebration not to be missed: the Day of the Dead. Depicted in the animated Disney film Coco and the James Bond flick Spectre, the Day of the Dead is a large event celebrated with painted faces, elaborate alters, and celebratory processions. If you’ve ever wondered what’s behind it all, you’re in luck. Read on to learn more about this festive occasion.

Current traditions for both have evolved from early indigenous and religious rituals. Some similarities in how people celebrate include getting dressed up in costume, wearing masks, and receiving treats. Some differences are more abstract, such as the offerings and symbolism, while others are more concrete, like holiday dates and food consumed.

What is the Day of the Dead?

The Day of the Dead, or Diá de Los Muertos in Spanish, is a holiday traditionally celebrated near Halloween. It’s generally associated with other observances, like All Hallow’s Eve, All Saints’ Day, and All Souls’ Day, and involves family and friends gathering to remember and pay respects to friends and family members who have died.

How did Day of the Dead originate?

Going back thousands of years, the event is said to be rooted in rituals honoring the dead in pre-Columbian Mesoamerica. In Aztec culture, death was a phase in life in which the soul departs but returns when it’s invited back to the living world, sharing in the joy of being reunited with friends and family.

When does the Day of the Dead occur?

A multi-day event, Day of the Dead celebrations can begin as early as October 28 and end on November 6. However, most festivities happen on November 1 and 2.

Where is the Day of the Dead celebrated?

The Day of the Dead is largely celebrated in Mexico, but observances can also be found elsewhere, usually by people of Mexican heritage. In the U.S., states like Texas, New Mexico, Arizona, and California hold Day of the Dead events. You can also find parades and events marking the occasion in the Philippines and Europe. 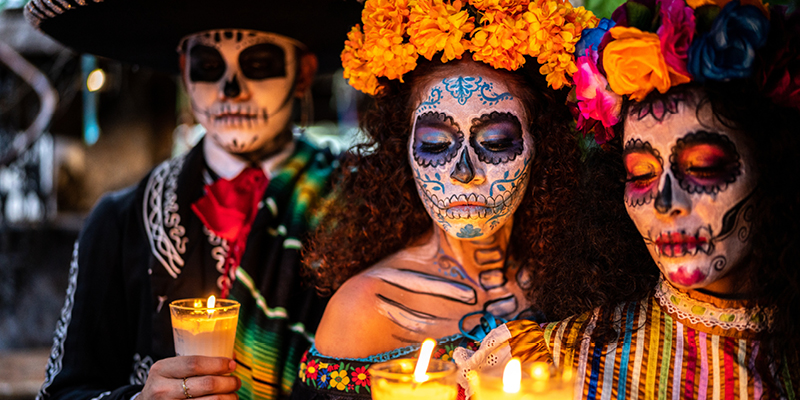 How is it celebrated?

The event is celebrated differently across the world, but typical commemorations include decorating the gravesite of the deceased and creating an altar to the deceased person at one’s home. Offerings, called ofrendas, are left at these places to honor the dead and invite them back. You might see photos, candles, bread, salt, colorful marigolds, and the deceased person’s favorite foods, drinks, and other items. Additionally, some cities hold parades that start at a cemetery and end at a church, concluding with a festival honoring the dead. People may also don masks or face paint depicting a sugar skull, called a calavera, and dress up.

Is it a somber, spooky, or happy occasion?

A celebratory occasion, the Day of the Dead is meant to be happy and fun. It’s the day when the border between the spirit world and the real world disappears, and the dead are welcomed back to eat, drink, and be merry.

What’s the meaning behind the Day of the Dead’s sugar skull?

One of the most recognized traditions of the Day of the Dead is the use of the skull—you’ll see skeletons, sugar skulls, skull masks, and much more. A dominant figure in Mesoamerican cultures, the skull symbolizes a rebirth into the next stage of life. Today, people use skulls, or calaveras, to commemorate the dead. These sugar skulls are decorated with colors, flowers, stripes, dots, and swirls to signify the reverence paid to the deceased person.

You can absolutely combine your holiday celebrations in any way you want. In fact, if you’re hosting trick-or-treaters this year, follow these tips for handing out Halloween candy.